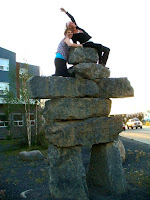 A month ago, I returned to Ottawa after six weeks in Inuvik. Since I've been back, friends have been asking me what I miss most about the North. After much thought, I've come up with three main (and conveniently alliterative) things: the pace, the peace and the people.

The Pace:
I like that time is more ... hmmmm .... flexible ... in Inuvik. For the most part, people aren't watching the clock. Things happen when they happen, and they take as long as they take. (I realize that this would drive A-type personalities crazy!) I like the ebb and flow of it all—although even I will admit, the night I waited four hours for the jigging contest to start was a little much. But once you accept that the posted schedule is merely a suggested guideline for how an event will go, you can relax and socialize while you wait.

Inuvik is quiet. Sure, there are cars—and trucks, lots of black pick-up trucks—but what is missing is that constant hum of traffic and airplanes, the white noise of more populated places. After my first trip to Inuvik, in 2009, it took me months to get used to the loudness of Victoria again!

I don't know if this counts as peace ... perhaps it's more peace of mind ... but there's no pollution in Inuvik. OK, if I'm honest with myself, I would have to say, sadly, that there probably is—but certainly not to the degree it exists in the South. In the same way you don't realize how noisy your world is until it is completely silent, you don't realize how tainted your air is until you breathe the pure fresh air of the Arctic.

The People:
As one of the TRC commissioners said, Inuvik is a model of inclusivity. It is a town where everyone is accepted and taken care of. "Nobody goes hungry," is a common mantra. Aboriginal and non-Aboriginal, all races and religions, able-bodied and disabled, children and elders ... everyone who lives there is part of the community.

People say hello when they pass on the street; everyone is

welcome at community events—even non-residents like me; and everybody DANCES!!    I love a place where men, women, even teenage boys get on the floor and dance.

With all this friendliness and good humour, that's not to say there are no social problems in Inuvik. Alcohol and drug abuse are a reality; some kids don't have enough to do, so they steal bicycles; and dogs are not necessarily treated as furry members of the family—many are left to fend for themselves.

So ... Inuvik is not a perfect place. The cost of groceries and housing is outrageous; the people who forget to go to bed in the summer because the sun never sets, and then have parties outside your window at 3 a.m. are annoying; and the swarms of mosquitoes

that don't seem to understand the "Off" part of Deep Woods Off are downright ruthless.

But I still love it there. Let me qualify that ... I love it there in the summer. Not sure how I'd feel about December when the sun never rises, or February when it's -50 C. But I sure love that midnight sun.
Posted by DD at 10:07 pm No comments:

I'm back in Ottawa, but I still have a few stories to tell about my visit to the far North. This one is about Bernadette Saumik, a soapstone carver from Rankin Inlet, Nunavut.

I met Bernadette the first day of the Great Northern Arts Festival, or GNAF (that's "guh-NAFF" to those in the know).

She chose her chunks of soapstone with care, then allowed the birds and animals living within the stone to reveal themselves to her.

Bernadette was one of just two women carvers at GNAF. (The other was Marion Taylor Pokiak, a young gal from Tuktoyaktuk.) At 72, Bernadette was a good 40 to 50 years older than most of her carving colleagues at the festival. She has been carving since age 11.

What made Bernadette so memorable was her carving style. As the other sculptors set to work with their power saws, Dremels and electric grinders, Bernadette sat on the floor in the corner with her handsaw, file, hammer and chisel, carving by hand.

The irony amused me — here was this tiny elder sawing away at her stone, while all the strapping young men blasted at the rock with their power tools.

After that first meeting with Bernadette, I visited her daily, watching her work and following her progress.

Her English is limited, and my Inuktitut is nil, so we communicated using hand signals and mime. As her first sculpture emerged from the stone, she told me it was

The next one was "ukpiquaq," which I thought meant ptarmigan, but now I think it must mean snowy owls (plural, versus ukpiq, singular), because the finished sculpture was a mama snowy owl and two young'uns.

Another day, Bernadette sang — and acted out — a song for me. I guessed it was about dreaming she'd turned into a bird that flew high into the sky. (She confirmed that storyline later through a translator.)

In the end, Bernadette carved six sculptures during the 10-day festival. And she won the Artists' Choice Award for Best Sculpting/Carving. 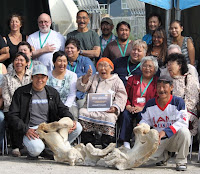 On the festival's closing day, I interviewed Bernadette (via a translator), just in case I can find a venue to publish a story about her. Then I practised another new word: "qujannamiik." Thank you.

Diane Dakers is a Victoria-based print and broadcast journalist temporarily studying and teaching in Ottawa. This summer, she is spending six weeks in the Western Arctic. These are her adventures.